21 Building Stories: Some Few Questions Begging For Answers About The Collapsed Ikoyi Tower

I wasn’t going to offer any opinion on the matter of the Ikoyi collapsed tower for several reasons but I see a lot of misconceptions being peddled here.

When accidents happen, everyone suddenly has an opinion as to the reason why the accident occurred. Hmmm, no wonder the Yoruba adage says ‘eniti cocoa e ba ye, lo mo lo’ … it is the farmer whose cocoa tree survives that knows how to plant.

However, accident always happens because something has gone wrong not necessarily due to negligence or incompetence . Sadly oftentimes our lynch mentality obscures our capacity to investigate the root cause of what went wrong so as to take preventive measures. Someone must always be blameworthy!

Accidents happen and there are cogent lessons for everyone. In this particular instance of the Ikoyi collapse, there are too many lessons and too many questions for all stakeholders, developers, consultants, regulators, financial services as well as off-takers.

Confidence in the industry will wane and the far reaching implications are too gruesome for contemplation. What has collapsed is far more than a building!

The secondary property market is the source of prosperity of great nations and that is what has gone down with that structure. Most people will not touch high rise ever again with a ten foot pole. Again how will prospective developers access funds going forward? Regulators will have knee jack reactions with a lot of obnoxious regulations…

They are already mulling a law in Lagos that anything above 4 floors must be built by the likes of Julius Berger, El-allan, Cappa etc what does that portend for indigenous contractors? Off-taker fund will be paid into government escrow account and will be accessible with bank guarantee or insurance bonds. Without off-takers funds, developers will have to borrow from commercial banks at close 30%! 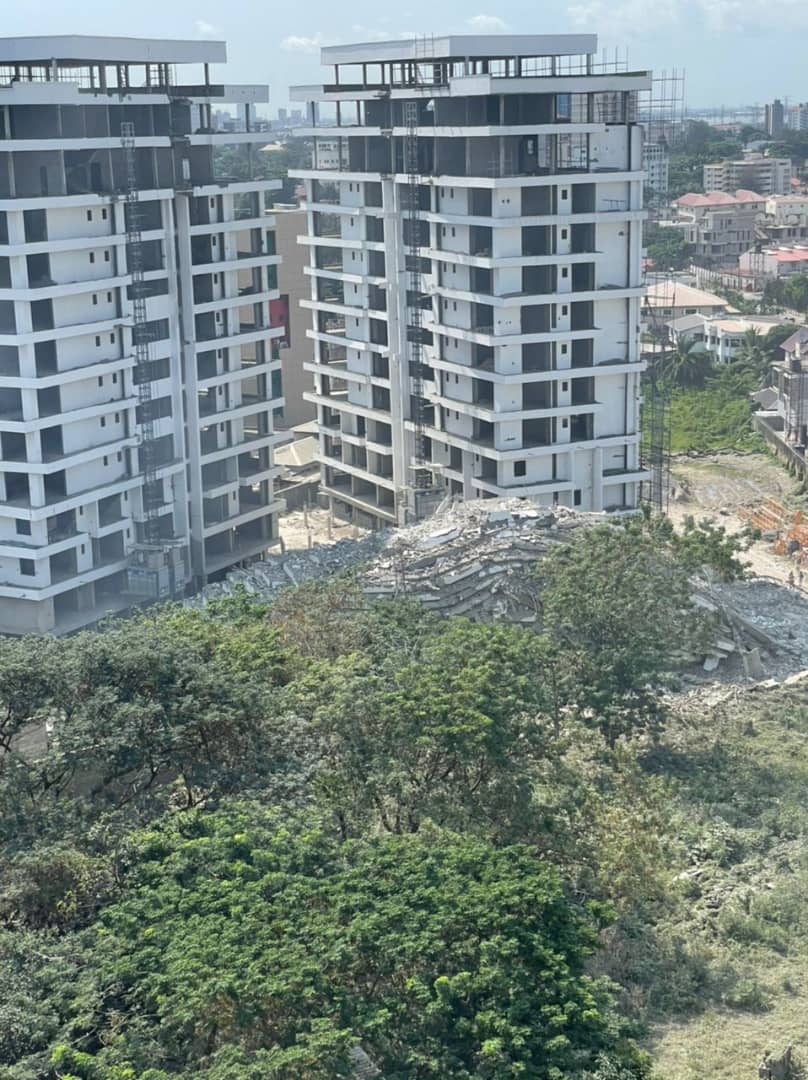 Everyone will be looking for money to buy land and develop on their own, that does actually means certain areas will be off limits to most people . With N200m you can own a comfortable apartment in Ikoyi from developers whereas you will need like a billion naira to own land before talking about construction! Imagine if everyone has to buy their own land in London to own asset?

Yesterday was really a sad day for Nigeria! All the gains of the past 3 decades in real estate may have gone down with the Ikoyi property!

I take exception to the blame game going on here and make bold to say that with this kind of ‘pull him down attitude’ we may be too blindsided to really investigate the root cause of the collapse. What manner of collapse was that? Looked like controlled demolition to me, not touching any of the close buildings!

I knew the late developer, Femi Osibona. He was a very personable, passionate man with a heart of lion. Like most entrepreneurs, he may be a little impectuos but was certainly not a criminal, neither was he suicidal. He was planning to live in one of the penthouses . I was there with him to pray severally. He developed in London, built in South Africa and did a 40 apartment estate on Mosley road Ikoyi. Dele Momodu lives in one of the penthouses there.

I will share real pictures of the development that came down and you will certainly not see any sign of stress. Engineers, public servants, builders , professionals bought into the project and paid millions of dollars. Were they all stupid? I saw the c of o and even have a copy, Lagos State has come out to say 21 storey was approved .

The structurer engineer that released a funny letter of withdrawal of service acted in bad faith. Was there an acknowledgment on the original letter he shared ? Did he copy the authorities? How convenient to leak the letter after the disaster? Trevi foundation did the foundation of my friend’s house in Gbagada/maryland arowojobe area and the building sank!

That area has ended the career of many brilliant consultants because of the shifting soil texture? Another friend’s house is sinking at Osborne foreshore not because of defective foundation but settling sand. Nowadays Can we even guarantee the integrity of all materials? A lot could have gone wrong…

Let’s wait for the report of the experts before we cast our stones. An accident has happened, lives were lost , people’s husbands, fathers, son, daughters … these are people amongst us … it could have been one of the days I was there! The least we can do is show empathy and let the authorities do their work . I am sad and bereaved of a passionate entrepreneur and Christian brother.

May his soul Rest In Peace.- Akinyele Oladeji

Gani Adams to terrorists: Don’t test our will to defend S-West