Annual Review: Osinbajo 6-Years Failure, To Lift 600 Out Of Poverty And 600 Out Of Homelessness In Remo, By Adedara Oduguwa Ph.D 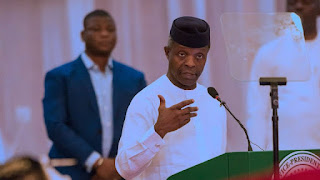 Annual Review: Osinbajo 6-Years Failure, To Lift 600 Out Of Poverty And 600 Out Of Homelessness In Remo, By Adedara Oduguwa Ph.D

2022 Budget: Presidency to take home 150.6 billion naira. Wow!This is coming in a country that’s globally adjudged the capital of poverty in the globe.

Seeing this, I asked ‘ what comprises the presidency?’ The President, VP, Chief of Staff, ministers, Personal Assistants, Special Advisers, Secretary of the federation, their domestic staffs and other highly unnecessary portfolios.

This budget of 16.39 trillion naira with over 5 trillion naira coming from fresh loan while over 3 trillion naira will be spent on loan servicing. Is an indication that Nigeria is rapidly retrogressing and their may not be any Canaan as we have left Mount Sinai, about to cross the Red Sea as we are on our way back to Egypt.

In specific terms, again, Gen. Buhari and Fake Pastor Osinbajo are to spend 3.6 billion naira on feeding and travel. This is the highest travel and feeding budget for the President and VP since independence.

Do you wonder why the president must spend over one billion naira traveling at home? The answer is not far fetched. Nigeria today is not secured for anyone and the president is not immune against such possibilities. The president will have to spend more money to visit his farms. Also, our roads are in dilapidated states, so the president won’t be traveling by road.

In addition, the president won’t be traveling abroad to strike bilateral deals that could take Nigeria out of poverty. Most of the President’s foreign trips will be for his medical check-ups and soliciting for our creditors to write-off our debts.

Then, it’s obvious Nigeria’s handlers (Buhari and Osinbajo) are the greatest enemies of Nigerians. They are heartless, insensitive, greedy and carefree.

Perhaps, one may forgive our illiterate President, but how can we overlook the shenanigans of a Professor of Law who also doubles as a fake pastor?

Prof. Osinbajo, who currently earns over 5b naira officially annually, do not have a single pet project in Remo, Ogun or even Nigeria? At a time when poverty is rampant among our people. Even, micro organizations in Remo like SagamudevelopmentforumUnitedkingdom,Bright Approach Club Of Sagamu, or even good people like Hon. Ladi Adebutu, Hon. Adeniran Ademola and my humble self are working steely to deplete poverty in Remo.

It may interest you that the VP would have taken out 600 people from poverty in 6 years and given 600 people houses (asking them to pay in installment), if he genuinely love the people of Remo by spending only 20 percents of his gross legal earnings on the people annually.

Illustrating this, Osinbajo with a jumbo legal revenue of 5b naira per year could spend 1billion (20 percents of his gross) on Remo (Sagamu, Ikenne and Remo North) to cater for housing and employment.

His total impart index per year on Remo people would have been 1000 people per year. Having spent over 6 years as VP today, Osinbajo would have made 600 people multimillionaires and another 600 people house owners. Specifically, the three Local Governments would have gotten 400 people each benefiting from this massive poverty alleviation interventions.

So ask yourself, do you still think Osinbajo is a genuine pastor? Do you also think the VP is from Remo? Do you think General Buhari is still his teacher on how to spend the money allocated to him annually? Do you think he truly cares about Remo people, Ogun indigenes or Nigerians?

Personally, I am disappointed in the ways most of our traditional leaders could not call out this self-centered politician to look back. Our people are suffering at the expense of Mr Buhari and Prof. Osinbajo wasteful spendings.

2023: Only God Will Forgive Osinbajo For These Seven Cardinal Sins

How President Buhari And The APC Are Corrupting Democracy