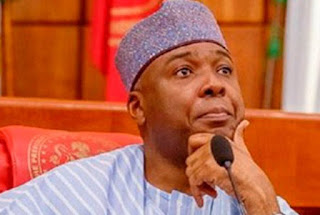 The former president of the Senate, Bukola Saraki, has hinted that a former governor and some bigwigs will soon defect from the All Progressives Congress to the Peoples Democratic Party.

During an interview on Arise TV on Tuesday, the former Kwara State governor said the APC members were currently concluding plans to defect to the Peoples Democratic Party ahead of the 2023 general election across the country.

Saraki also hinted that there will be a gale of defection this week.

He said, “We have the potentials to turn the country around and that is why I believe with the right leadership, things can change in the country. I often say that no one can give whatever he does not have. In 2023, we have to get it right and to do that, we needed the right kind of leadership.

“There were certain governors that we already know that they will leave. And we were not surprised that they defected to the APC. Since then, we have had some bigwigs that joined us. Also in this week, there is a former governor that is going to join our party, PDP.

“Aside from that, we know that some of the leaders in the ruling party will not defect early, rather they do it late. And you saw that during the 2015 election. So, keep watching, And Nigerians will not be surprised when they begin to see some defections from the ruling party to the PDP.”

Saraki said he was not planning to return to APC in 2023.

He said, “On the question that if I decide to run and don’t get the ticket, would I defect? I think that is not really fair. In 2015, I ran for the presidency and didn’t get it, but I offered myself to be the DG of Atiku, and I worked hard.

“I’m a team player; personal ambition is not what the issue is today; what is important is to get this country right. I have my children and grandchildren, and we must leave a better country with jobs for our talented youths. The fact that I said some people would defect does not mean I would defect.”