Ayo Olopon: Oh Ye African; Where Are Your Inherited And Ancient Prides? The Traditional Game That`s Better Than Virtual Games By Prince Lahbash 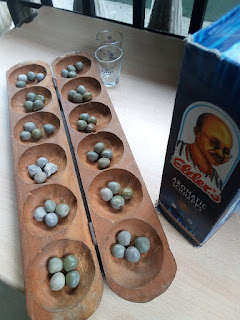 Ayo Olopon: Oh Ye African; Where Are Your Inherited And Ancient Prides? The Traditional Game That`s Better Than Virtual Games By Lahbash

With Ayo Olopon, chess has got nothing on us! But technology has taken our space

OH YE AFRICAN, WHERE ARE YOUR INHERITED AND ANCIENT PRIDES?

The relationship between technology and culture is cyclical. Logically, a culture will develop technologies based on the needs or desires of the people, because this is where the creative influences lie. As this technology spreads and is absorbed into the people’s lives, it affects their culture and way of life.

One of the way technology impacts global cultures is through media globalization. One of the biggest ways to influence people worldwide is through media technology. As we mentioned in our example at the beginning, people are able to get information almost immediately because of things like cell phones and the Internet.

As a continent or region, how do we effect technology with our culture is the question that every region, most especially the Yoruba’s Must answer subsequently if truly we want to awake the lost glory of our cultural heritage.

AS AN AFRICAN, BLESSED WITH DIFFERENT CULTURE, WE NEED TO LOOK INTO THE NEGATIVE EFFECTS OF TECHNOLOGY ON CULTURE BEFORE WE LOSE OUR PRIDE

Try to look from another lens and broaden your concept about technology usage. The constant stream of messages and visuals in the form of images and videos are immensely attractive features that are impossible to leave. From a smartphone, things are overwhelmingly handled the brain and make it impossible to focus on a task that is more substantial than just wasting time on video games and other tools. One thing that is essential to be noted here, such engagement leads to psychological disorders because we have no idea how much time we are putting in such activities. If someone is indulged for more than a few minutes with such things, it would be difficult to move you on without feeling compelled.

Moreover, smartphone devices are framed to fading ability to concentrate and think deeply. Else it would ultimately in result to bury your creativity. If you are using honor 8x which was launched under the banner of Huawei then it would again be in result of excessive use of a smartphone. The persistent buzz, ping or beep of your smartphone are the few items that can distract you from important tasks that are due on a fixed time.

A lot more can be explained in favor and against the usage of a smartphone but the point is somehow there is a need to make a balance. If not, there might be chances that we can detract from our main goal. For example, the use of smartphone gadgets among students at a university can be taken as a formal and informal tool for academic learning. A lot of studies are available that proves the better results and enriched capabilities due to mobility factor among students while on the other hand there is a bunch of scholars who strongly oppose and prove the excessive use of smartphone affects the academic performance of students.

It is the personal observation that at start everyone could be trapped in such appliances because of the interactivity factor. A time period is required to understand the actual purpose of usage of a device. All of the innovations are adopted by users without proper purpose in mind because a lot of functions are displayed in the list. Narrowing the working is a bit steady after formulating the things. If you could manage, instruments will work in your favor, if not then be ready for negative outcomes and horrible consequences.

However, the fact still remains that African cultural heritage is under threat and we are gradually losing our identity as a people. This is because we are failing to pay attention to the little but mighty details that represent our traditions. We are allowing western ideologies to wash them away like sand on the seashore which eventually happens not to be so.

Our minds have been colonized and with each passing day, a part of us dies. Our games, dance, music, food, and language are gradually dying away with time and freely; we embrace western ideologies.

Like many other African identities, Ayo Olopon or Ayo as it is otherwise known, depends on how convenient it is for the caller; which is reputed to be one of the oldest and most widely played board games among the Yorubas, is gradually losing relevance. The origin of the game is one of the most disputed facts in recent history as the game is played and enjoyed by Africans in different regions of the world, each claiming rights to its creation.

The game is on a long narrow piece of carved hardwood bearing few pods on each side; it requires a lot of brain power and mathematical skill.

The game is played in a carved wooden box, containing six holes on each side. At the start of the game, each hole contains four seeds (making it a total of forty-eight Ayo seeds).

Like Chess and many other board games, two individuals take the turn to play the game, counting the seeds on their side anti-clockwise.

The first player begins by moving seeds from his right-hand side to the opponent’s side. If the seed-movement terminates in a hole with three or less Ayo seeds, this player picks up the seeds, and seeds from preceding holes, if any.

Players take a turn until the seeds are exhausted.

Ayo is known under various guises in different places around the world. Some prominent examples of its names in different locations are Owari, Warri, Endodoi, and Kalah, to name just a few. It is believed to belong to a larger family of mancala games, and other variations of the game exist all over the world. The game is widely enjoyed and is reputed to be mentally challenging.

These days, the game – which has a lot of similarities to the tactical prowess of chess, is not as popular as it once was. But gladly, digital versions have granted a new lease of life that opened it to a whole new generation of players who appreciate the game.

The major question, however, is whether it is right for technology to replace culture and if it can retain the emotions and passion that this beautiful game evokes?

Have you played this beautiful game before?

Sagamu Youth Sport Festival will be bringing in another dimension to reawakening our cultural heritage in such a way that we won’t lose the heaven gifts that technology I gradually taking away from us.

Don’t give the opposition a chance to go