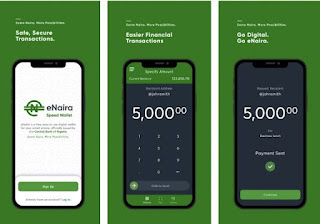 Less than 48 hours after its official launch by President Muhammadu Buhari, the individual wallet for eNaira has recorded more than 100,000 thousand downloads on Google Playstore alone.

Apple’s App Store does not readily show an estimate of downloads.

The Nigerian official Central Bank Digital Currency (CBDC) was initially scheduled for launch on October 1 but was shifted till later in the month.

eNaira is the first of its kind in Africa. According to the Atlantic Council CBDC tracker, eNaira debut made Nigeria one of the five countries in the world that have their own CBDC as the popularity of digital and cryptocurrencies continue to soar despite clampdowns in several countries.

There are two versions of the eNaira wallet – one for individuals (Speed Wallet) and another for merchants (Merchant Wallet).

However, the app is currently available on the Apple app store with 2.6 over 5 ratings.

The recently launched eNaira Wallet application has been removed from Google Play Store barely 36 hours after it was launched by the Central Bank of Nigeria, Eaglesforesight has gathered.

However, the app is currently available on the Apple app store with 2.6 over 5 ratings.

The digital currency has two applications, which are eNaira speed wallet and eNaira merchant wallet.

On Monday, the two apps were rolled out on the Google play store and the Apple store.

The eNaira was developed by the fintech company, Bitt, which was also responsible for the creation of CBDC in some East Caribbean countries.

At the launch on Monday, the Central Bank of Nigeria Governor, Godwin Emefiele, boasted that 500 million eNaira ($1.21 million) has already been minted.

Meanwhile, a notice on the eNaira website explained how the currency and the wallet would work.

It read: “Get Ready With Your Accurate BVN Data For Your Hitch-Free Enrolment.

“To sign-up on the eNaira speed wallet, you would be required to input the following details exactly as captured during your BVN enrollment.

“Your banks are waiting to assist you in validating and updating your BVN details to ensure seamless enrolment to the eNaira platform.”

However, negative reactions have trailed the launch of the app as many users complained of several issues, ranging from the inability to link their Bank Verification number, to getting a verification email.

Checks by Eaglesforesight as of Wednesday afternoon showed that the app had only gained 1.9 stars out of 5 stars preview.

Also, in the review section, many Nigerians expressed their displeasure.

A user, Moyosore Fagbemigun, despite giving four stars, wrote: ”After sign up, I did not get the verification email in my BVN linked email. I have checked the spam folder and nothing yet. Easy registration process.”

Another user, Oscar Alexander, who gave it one star rating, noted, “I tried registering the first time. Told me there was no email attached to my BVN. I tried my other bank account. It told me an invalid account number. Lol. Now it says too many attempts with the same BVN. What a joke!”

“Every single attempt to get registered on the platform seems futile. It kept giving a prompt invalid BVN whereas my BVN is valid,” another user had said before the app was taken down.

Eaglesforesight observed that majority of the users gave the app one star. It is not clear whether the app was removed due to the poor rating it suffered or if the CBN had done that itself.

The CBN Governor, Godwin Emefiele, in a conference at the beginning of the month, promised that the country would start digital Naira currency.

Emefiele said the eNaira would operate as a wallet through which customers could hold existing funds in their bank accounts, and that this would accelerate financial inclusion and enable cheaper and faster remittance inflows.