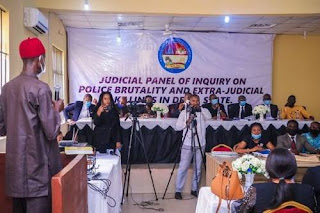 The payment followed series of agitations concerning the delay in the implementation of the panel’s report.

The Delta State government has said it would pay a total sum of N102,450,000 as incidental claims to victims of police brutality and human rights violations in state as part of implementation of the recommendation of the report of the Judicial Panel of Enquiry set up in the wake of last year’s #EndSARS protest.

The payment followed series of agitations concerning the delay in the implementation of the panel’s report.

It added that the panel established acts of police brutality in some of the investigated cases, resulting in death or denial of personal liberty, hence, the award of monetary compensation.

According to the SSG, the panel upheld the judgement earlier delivered by high courts in the state for various cases of police brutality; some of the judgements had not been complied with till date, including payment of judgement debts associated with them.

Ukah said, “The state government, having considered the panel’s recommendations in these two categories of cases, has accepted to pay the incidental claims recommended for the victims, amounting to the sum of N102,450,000.00.

“This payment would be effected in due course. The panel received another 30 petitions which required the Commissioner of Police to carry out investigations to ascertain the circumstance of the death of some persons in police custody.”

Ukah stated that the inquiry would also entail the investigation of policemen identified to be involved in various acts of brutality.

Recall that the Delta state Judicial Panel of Enquiry set up in the wake of last year’s #EndSARS protest, received 86 petitions across the state after its inauguration in October last year.

Meanwhile, the Delta State Governor, Ifeanyi Okowa, inaugurated a committee for the protection of human rights in the state, with a call on citizens to be law-abiding in all endeavours.

Inaugurating the committee Wednesday in the Government house, Asaba, Okowa, who is heading the committee, said that the constitution of the committee was part of the recommendations of the #EndSARS Judicial Panel of Enquiry that investigated complaints of police brutality and extra-judicial killings in the state.

Madrid will meet Barça in the Copa del Rey semi-final