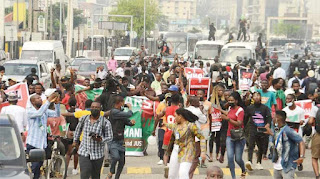 States, including Akwa Ibom, Oyo, Ogun, Enugu, Benue, Osun and Gombe, have yet to pay victims of police brutality a year after they set up panels on human rights violations.

Officials of Akwa Ibom, Benue and Oyo states, in separate interviews with The EAGLESFORESIGHT on Wednesday said since the Federal Government directed the setting up of panels, which investigated complaints of human rights violations against the police, it should pay compensation for the victims.

The Eaglesforesight gathered that states that had not paid compensation as ordered by the panels included Akwa Ibom, Benue, Osun, Oyo, Ogun and Gombe.

But it was learnt that Lagos State had paid N420m compensation to the victims.

Following protests in 2020 against human rights violations by the dissolved Special Anti-Robbery Squad and other police units, the National Economic Council directed states to set up judicial panels of inquiry to investigate the complaints, with a view to delivering justice for all victims of police brutality.

Findings indicated that no fewer than 16 had yet to submit their reports to NEC and pay compensation for the victims.

It was gathered that some states, which had submitted their reports, had not paid the victims.

The Chairman of the Akwa Ibom State Judicial Panel on the review of Police Brutality, Justice Ifiok Ukana (retd.), in an interview with The EAGLESFORESIGHT, said the #EndSARS liabilities were on the shoulders of the Federal Government.

He added that the panel was set up at the instant of the Federal Government.

“What I know is that our report was finally given to the National Economic Council in the Vice- President’s office. That is the last we know.

“The National Economic Council has met and the only hint we have had is that the Speaker of the House of Representatives, Femi Gbajabiamila, has said the 2021 budget will accommodate payment of compensation.”

We will submit our report to Abuja, payment to be made from there – Oyo gov’s aide

A member of the panel in Oyo State, Mr Babs Oduyoye, who is also the Special Adviser to the Governor on Political Matters, told one of our correspondents, that payment would be made from Abuja after the state government had submitted the report to the Vice-President.

He stated, “Our approach is to do everything. Some states did it in piecemeal but we have done all the cases and made our recommendations and what remains is to get a date and submit our report to the state government

“A copy of it will be sent to the NEC under Vice President Yemi Osinbajo in Abuja. From there, they can start paying the victims.”

Meanwhile, some of the victims of police brutality who took their cases to the panel told one of our correspondents on Wednesday that they had not been paid.

Mr Atanda Jimoh, who is the father of Isiaka Jimoh, an apprentice shot dead in Ogbomoso, during the #EndSARS protest in 2020 told our Correspondent that he had not yet been paid.

In Enugu State, the judicial panel has not reconvened since it suspended its sitting on August 10, 2021

A member of the panel, Osimond Ugwu, confirmed to our correspondent that the committee had stopped sitting and that many petitions had yet to be heard.

Ugwu said that even as a member of the panel he could not categorically say whether the panel had concluded hearing or not.

He stated, “About a week after the inauguration of the judicial panel, another panel, called Administrative Panel of Inquiry on Police brutality on #EndSARS was inaugurated to be working at the same but with different time terms of reference.

“While the administrative panel headed by Justice Obieze (retd,), which was limited to everything that happened during the #EndSARS protest, had three months to submit its findings, the judicial panel which was earlier inaugurated was concerned abou everything that had to do with acts of brutality and all forms of human rights violations including extra-judicial killings in Enugu State as long as they fall within the time of existence of the state and have to do with actions of the police.

“However, while the #EndSARS panel submitted reports in March this year, the judicial panel is still sitting.”

In the North-East, the Gombe State Commissioner for Information Julius Ishaya, said the compensation had not been paid by the state government.

According to him, the compensation will be paid after the state government has set up another committee to study the #EndSARS panel report and produce a White Paper on it.

We have not paid, report has been submitted to Abuja – Osun

In Osun State, Ayo Ologun, who is a member of the #EndSARS panel, said the committee ordered that N200m be paid to the victims.

Ologun said since the report was submitted to the governor on Thursday, August 5, nothing had been heard about its implementation.

But the Chief Press Secretary to the governor, Ismail Omipidan, in a chat with The EAGLESFORESIGHT, said the government was on the verge of acting on the recommendations of the panel, when it was asked to submit the report to the Federal Government.

“We have submitted the report to the Federal Government but we have not started paying compensation before we were asked to submit the report and we did that,” Omipidan said.

Ogun yet to pay victims of police brutality

Also, victims of police brutality in Ogun State said they had not been paid compensation as ordered by judicial panel.

But several attempts to get the reasons for the delay in the payment of the compensation proved abortive as the government officials did not respond to the questions asked them.

The state Commissioner for Information, Waheed Odusile, the Attorney-General of the state, Akingbolahan Adeniran, and the Chief Press Secretary to the governor , Kunle Somorin, did not respond to the messages sent to their phones.

The calls put through to Odusile was not answered while both Adeniran and Somorin could not be reached on the phone.

Meanwhile, the Independent Investigative Panel probing allegations of human rights violations against SARS and the police says it has earmarked N150m for the payment of victims of police brutality and extrajudicial killings in Abuja.

Hillary Ogbonna, the Secretary of the panel set up by the National Human Rights Commission, said this during a chat with The EAGLESFORESIGHT on Wednesday, Eaglesforesight gathered.

“We have about 20 cases from previous judgments of the court on human rights violations against the police which they did not honor. The petitioners petitioned us to pay and we have agreed to pay in various degrees.”

On how much money would be awarded to victims, Ogbonna said, “It is about N150m that we are going to pay in varying degrees. Some are extrajudicial killings, some are torture.

“The number of people we will compensate next month will be 35. We are budgeting for it in 2022 so once the budget is passed, we will call them in January and keep paying. We will still be sitting by March.”

The Attorney General and Commissioner for Justice in Benue State, Michael Gusa, on his part explained that N304.5m compensation recommended by the state panel of inquiry would be paid by the Federal Government.

Gusa further explained that states only complied with the Federal Government directive to set up panels to investigate the report of police brutality.

A source close to the #EndSARS panel in Lagos told one of our correspondents that a progress report would be submitted before the end of November.

According to the source, the Lagos State panel had initially set up a N200m compensation fund which was exhausted.

He said, “The panel in Lagos is different from those in other states. Once the Lagos panel finds a petition meritorious, they pay immediately. Once the first N200m was exhausted, an application was made for another N200m. Therefore, a total of N400m would have been exhausted on Monday (October 17).

“There were some petitions that were not heard because of time but the government would look into that.”

When contacted, the Lagos State Commissioner for Information and Strategy, Mr Gbenga Omotoso, said the state government was interested in genuine reconciliation and peace, following the #EndSARS protest that rocked the state last year.

Omotoso, in an interview with one our correspondents on Wednesday, said the about N420m had been paid to 72 victims.

He said, “The governor, Mr Babajide Sanwo-Olu set up a panel of enquiries on #ENDSARS and police brutalities before the Federal Government through NEC asked states to set up the panel. The governor said the state government will want to know the truth of what happened during the #ENDSARS protest.

“Before the panel called it a day, no fewer than 72 people have been paid about N420m. But for us in Lagos State, it is not just about the money, it is about genuine reconciliation, peace and getting together our friendship.”

Eaglesforesight through The EAGLESFORESIGHT gathered that the Ekiti State Government had implemented the first report submitted to it by its panel by paying N7m to the beneficiaries, but those in the second report had not been paid N13.8bn due to them.

One of the beneficiaries, a journalist, Wole Balogun, who approached the panel over brutalisation by soldiers, was awarded N100,000 compensation by the panel, said, “The compensation was paid by the state government almost immediately into my account”.

But another victim, who was in the second report, Anthony Chukwuebuka, a corps member at the time he was brutalised by SARS officials , said he had yet to be paid the N2m compensation due to him.

Meanwhile, the Nigerian Bar Association has lamented the refusal of states to pay compensation to victims of police brutality.

This is just as the NBA called on the police to immediately release all protesters who were arrested on Wednesday during the demonstrations held in commemoration of the October 2020 protests.

In a statement by its President, Olumide Akpata, the organisation said only Lagos State had paid compensations to victims as recommended by the several judicial panels set up.

The statement read in part, “While most of the investigative panels have concluded their assignment in states such as Rivers, Enugu, Edo, Nasarawa, Plateau amongst others, it is depressing to note that in most of these states, the payment compensation to victims whose petitions were established has simply not happened.

“Save for Lagos State where the panel has been most successful, in terms of the number of petitions treated, and the compensations doled out, the situation in other states has been anything but encouraging.

“The situation is indicative of the government’s less than noble attitude to the plight of citizens; as part of which may be recalled, exacerbated the protests last year.”

He said it was unfortunate that during the one-year anniversary of the #EndSARS protests, demonstrators were being harassed by security agents.

“The NBA unequivocally calls for unconditional release of all peaceful protesters and journalists arrested today and hereby mandates the NBA Human Rights Committee to immediately spring into action to ensure the protection of their rights,” Akpata said.

He commiserated with the families of those who lost their lives during last year’s protests.

2023: I Was Born In 1952 – Tinubu Finally Opens Up On Age, Chicago University Certificate, Work Histor

2023: I have never lost any election – Tinubu fires back at Babachir Lawal