#EndSARSMemorial: The Memories Are Fresh, Seems Like Yesterday After A Year 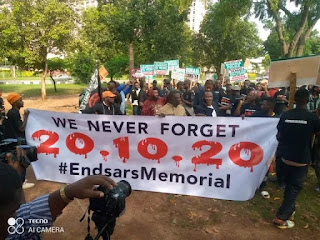 #EndSARSMemorial: The Memories Are Fresh, Seems Like Yesterday After A Year

On October 20, last year, our brothers and sisters were maimed and brutally murdered by Nigerians Army on the order of the Federal and State Government. Our nation’s flag was stained with the blood of our people.

What was our offence? What did we do wrong? We only demanded that the police stop killing us unjustly. We cried for justice, we called for a better Nigeria, we clamoured for good governance. But, what did we get? We were massacred. We were shot at like common criminals for exercising our right, our right to peaceful protest.

We had begun a peaceful protest, the #Endsars protest. This time, we were united, as we gathered at the toll gate of Lekki, in Lagos, the Isaac Boro Park in Port Harcourt, the unity fountain in Abuja and other places in other cities. We marched through the streets of different states and cities fighting for a cause. The streets became our home. We slept, woke up and fed on bare floors. We made up our minds to do this for our future and that of our unborn generations. We sent a strong message to the people in power.

Seeing the fire in our eyes, seeing how dogged we were, they knew we were fed up with their bad rules. So they tried to forcefully stop us by all possible but intimidated means.

In a bid to curtail the protest, they employed different means which we foiled. They tried to send us away by showing false solidarity and making us offers. It failed! We stood by our conscience, we refused to be distracted. We had become more serious than they thought. They sponsored thugs who teamed up with security agencies to attack peaceful protesters and scare us away from the streets, but we were resilient and focused on our goal. They sent their thugs in our midst to employ violence by burning down and destroying properties, just so it looks like we have become violent, just to change the narrative. All these they did to ridicule and make nonsense of our well-desired intention. But it failed.

Since they had tried all means which had failed, on the evening of October 20, 2020, they sent the military to the Lekki tollgate which was considered the heart of all protest grounds. Still, we stood strong. Even as fierce as the men in uniform looked and heavily armed as they were, we weren’t deterred. Then, they considered no other option but to kill us. They ordered their men in uniform to shoot at us, which they did. Innocent Nigerians were shot; the blood of innocent Nigerians was spilled. Our people were killed. Our people died.

It’s been one year, and we still remember the evil done to us by those who were supposed to protect us. Just like yesterday, October 20, 2020, is still fresh in our minds. We remember our fallen heroes. Our brothers and sisters who died in the struggle for a better Nigeria. It is a day we will never forget.

2023 elections: What we must get right

Truly “Sowore Is Not A Politician But An Activist!” By Adeola Soetan

Imeko as metaphor for Abiodun’s strategy