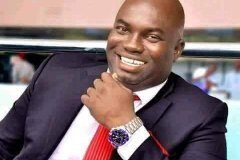 In this interview by Bankole Taiwo given to Eaglesforesight, a chieftain of the All Progressives Congress (APC) in Ogun State, Engr. Adeola Sosanwo speaks on varied topical issues especially as touching Ogun State politics insisting that Gov. Dapo Abiodun has no doubt done well to deserve another term come 2023. Excerpts:

The opposition recently came out to say the government of Prince Dapo Abiodun among other things has not lived up to expectations and surely does not deserve to pilot affairs of Ogun State beyond May 2023, what is your take on this?

Talk, they say is cheap and that was exactly what the opposition recently exhibited in the state. I say this because the government of Prince Dapo Abiodun has been fantastic with governance since he came on board on May 29, 2019. The governor has been focused and quite strategic about his approach to issues of governance. He came in as a successful entrepreneur in oil and gas industry with wide range experience in administration and management of resources. He has demonstrated so much competence and intelligence in governance touching every sector. He is an Apostle of Continuity in governance with how he has picked up some of the abandoned road projects by his predecessor, Sen. Ibikunle Amosun and completed them such as the Kuto dual carriage way, the ongoing Adigbe road among others. The governor has just reconstructed Abeokuta-Siun Sagamu expressway, the Epe-Ijebu Ode is also nearing completion, he has equally done feeder roads such as the Elite road, Abeokuta, Vespa road, Ifo, Navy-AIT road, Sango Oba Erinwole road, Sagamu among at least 200 roads the governor has either fixed or ongoing across the state. He is doing so much in the area of education with construction of over 2,000 classrooms, the yellow roofs school buildings are all over the state. The health sector, housing and agriculture are also receiving adequate attention. Look at the the just completed low cost housing estate at Kobape via Abeokuta and this is being replicated in Ijebu Ode, Ikenne, Agbara among others. This is not to say that the governor has done all, but within the time spent and the challenges of this cash-crunched economy aggravated by COVID-19, the governor has proven to be good manager of the scarce resources.

He has done so much to make the people of the state happy, and that’s why many are already rooting for his second term come 2023. We must give him another term because of his commitment to make sure the state is more prosperous. The governor is currently working to ensure that there is stability of power supply in our major towns, Ijebu Ode, Sagamu, Agbara and other industrial hubs, this will definitely trigger industrial revolution and all the economic advantages that come with it. In a nutshell, I can confidently say that the opposition is only bellyaching, because Dapo Abiodun is doing the job given to him to do by the people of the state. In local parlance, we say it is “bad belle” that is worrying the opposition and nothing more.

What about the reported rift between Otunba Gbenga Daniel and Gov. Dapo Abiodun which people are already insinuated could make or mar the ruling party?

Reported rift between Gov Dapo Abiodun and the former governor, Otunba Gbenga Daniel is nothing but outright speculation, figment of imagination of those peddling the bogus lie, may be another work of the opposition. The report remains unfounded and baseless. The two political leaders have been associates and friends for a very long time and their relationship had been stronger as OGD joined the ruling party to team up with Gov Abiodun in lifting higher the state. People should just stop saying what never existed, they should not create wedge between the two leaders.

The news is out there that former governor, Otunba Gbenga Daniel is eyeing senate seat of Ogun East district in 2023, he is from Remo while the incumbent governor, Prince Dapo Abiodun being tipped for another term is also from Remo, some are already asking what will now become the fate of the Ijebus, the other half of Ogun East?

Well, people are saying it really because the fact remains that Prince Dapo Abiodun is definitely returning for another term in 2023 by the grace of God, it is even possible the Vice President, Prof. Yemi Osinbajo who is also from Remo to also contest for the presidency, well nobody is stopping my good boss, OGD from being in the Senate, but will the Ijebus be comfortable with these political arrangement?

Won’t they raise objection or issues of being marginalised?

Sincerely, the combination of OGD leadership at the Senate and that of Prince Dapo Abiodun at the state level will be very good, I am sure OGD will team up with the governor to further make life very enjoyable for the people of Ogun State. It won’t be like what we currently have with none of the three Senators cooperating with the governor, It’s even more terrible that even the one from us here in Ogun East is not supporting the governor. If the Ijebus will give their support to OGD, the Remo too will do same but it remains a very dicey one, I really doubt the support of the Ijebus, let’s wait till the time. There is definitely still going to be some round table discussions where we subtract and do some additions too, having the governor and senate from same division will surely want to truly raise some concerns, no doubt about that.

How do you assess the inputs of our federal lawmakers in the last two years?

Really times are hard when we look at the financial situation of the country but in the midst of all these, some of our lawmakers have tried to better the lot of our people. A good example is Hon. Adesegun Abdulmajid Adekoya fondly called Attacker representing Ijebu North, Ijebu East and Ogun Waterside federal constituency at the House of Representatives and maybe few other ones in the state. However, for the Ogun East here, aside the lofty contributions of Attacker, much cannot be said of other federal lawmakers including our representative at the Senate. We all can see what others are doing in other States like Oyo, Lagos, Rivers. Our lawmakers must wake up, they have not done enough. Ogun East lawmakers are not supporting the governor, they have rather been moving around campaigning for second term, yet they have nothing to show for their first time in office. The people will decide when the time comes.

Any updates on Agro-Cargo airport, how true is the rumour that it has been abandoned?

That’s another wicked lie from the pit of hell. This is a project that is going to have great impact on the economic growth and prosperity of Ogun State, work is going on there steadily and the runway is being constructed, very soon, the asphalt laying will commence, once the runway is done, it’s like the project is halfway and being a stakeholder, I go there regularly and I can assure you that the first phase of the Agro-Cargo Airport should be ready by October next year. The project is very dear to governor’s heart and he’s working round the clock to ensure that the first phase is completed as scheduled.

There’s also this issue of people serving with the governor as Commissioners, Special Advisers among others who are already going about angling for elective offices come 2023, and this is said to have been causing distraction and disunity in the government, how can the governor handle this?

I won’t pretend to say that as member of the party we don’t get to hear about all these. Yes, for a governor doing well, you may want to hide under his success to achieve yours but I want to say that this is rather too early. It is a distraction to the government. All we are supposed to do now is to support the government to succeed and shun all these selfish moves, 2023 is still far.

What are your plans as we approach 2023?

Yes, I am a politician, but I keep saying this that I am first a technocrat before becoming a politician. Before I joined the Senate race for Ogun East in 2019, I have always supported the government of the day, I am never ambitious. For now, my priority is to support Gov. Dapo Abiodun to continue his good works beyond 2023. Since I joined APC from PDP, many have been saying what have they now given you, you better come back to where we appreciate you and all that. I have always let them realise that I am not the type of politician that jump from one party to another. My ultimate goal is to support Gov. Dapo Abiodun to succeed beyond 2023 and as someone who believes so much in leadership, if the governor now say that go for the Senate or House of Representatives, I will be willing to serve my people in any capacity.

What’s your view about the agitations that the presidency should return to the South?

My view may be totally different even as against the stand of our party here in the south. Let me ask you, we have had Presidents from the south, what did the south benefit? We have equally had from the north, what has the north benefitted too? I don’t really care where the next President comes from but the person must be competent, dynamic and must have records. I heard that Sen. Bola Ahmed Tinubu is interested and I said why not because he has records, the federal government once starved Lagos State government with the federal allocation during his era as the governor and he survived it, I also heard that Prof Yemi Osinbajo, the Vice President is interested and all that. However, my view is that our next president could come from any part of the country as long as he has the requisite leadership qualities. I stand with competency and ability rather than for any other thing. Let the right person be there.

What is your charge for the people of Ogun State?

They should please be patient and support the government of Prince Dapo Abiodun to record more success in its determined bid to leave the state far better than he met it. Here’s a man who by the special grace of God already made his money before coming into power. So, he is very passionate about improving the lot of the people in the state, he thinks, talks and works on these every seconds. Our people should therefore shun destructive criticism and rather support our governor to do much more than he has done in the past.