Kano Will Give Tinubu Highest Votes In 2023 Presidential Election – Speaker 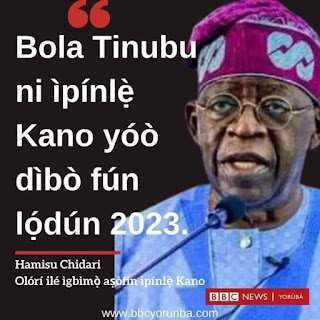 Kano Will Give Tinubu Highest Votes In 2023 Presidential Election – Speaker

Chidari said Kano State, which has the highest number of voters and delegates in the country, would repay Tinubu’s act of helping Muhammadu Buhari to become President in 2015.

“My purpose is to kick-start the journey that will take us to the Villa by God’s grace with Asiwaju Bola Ahmed Tinubu as the number one citizen of Nigeria,” he said.

The lawmaker added, “In Kano, being the state with the highest number of delegates, we have already decided and already concluded; we are set to give him at least 98 per cent of delegates in the primaries. Not only that, we are set as usual to give him the highest number of votes so that come May 29, 2023, we will be at the Eagle Square to swear him in as the President.

“All of us in the North-West are aware of the role he played in taking our son, President Muhammadu Buhari, to the Villa. So, we are going to reward him; we are going to pay him back.

So, I have assured him of victory. Almost all the delegates from the North-West states are going to vote for him in the next primary elections.”