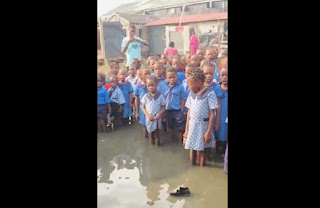 The Lagos State Government has broken its silence over a video that went viral over the weekend wherein pupils were seen in a flooded school assembly ground.

Eaglesforesight gathered that, the state government through the Ministry of Education on Sunday took to its official Facebook page to make some clarifications on the school. The post on the blue app read:

“The video was taken some months ago by a church that wanted to use the video to raise funds for the school.

“The building has been demolished and is being built.

“Lagos State authorities are sending officials there on Monday to ascertain level of progress.

“Thanks for your concerns.”

The above statements are been released

CBN Governor Should Take Responsibility For Lack Of Vision, Not Nigerian Students — NANS