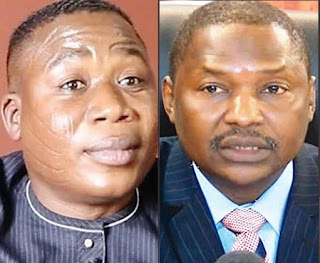 One of the Counsels to Chief Sunday Adeyemo, also known as Sunday Igboho, Chief Yomi Alliyu has faulted the claims made by the Minister of Justice and Attorney General of the Federation, Abubakar Malami, SAN.

The AGF had linked Igboho to a terrorism sponsor, claiming that the activist is being financed by a lawmaker.

Reacting, Alliyu in a statement lambasted Malami, saying what the AGF stated are mere conjectures not hard fact.

He also challenged the minister to name the lawmaker allegedly sponsoring the agitator.

The statement read, “Our attention has been drawn to a text press conference by the Hon Attorney General and Minister of Finance wherein he fruitlessly tried to paint our client and those patronising his car trade as terrorists and/or financiers of terrorists.

“I have gone through the text. Sunday was alleged to have transferred the sum of #12.7m to Abbal Bako & Sons owned by Abdullahi Umar. Transferring money to bureau de change to buy dollars is what is done by every businessman of our client’s calibre. Thank God that his passports and various bills of ladings were carted away by DSS during the ungodly invasion of 1st July, 2021.

“Thus, so far there is no evidence of receipt of money from Abbal Bako & Sons or Abdullahi Umar going by the text conference. What the Hon AGF stated are mere conjectures. Not hard fact. Our client according to him paid Umar and NOT vice versa thus believing what the Honourable Attorney General of Federation earlier said that Chief Sunday Adeyemo is being financed by people.

“The picture the Learned AGF wanted to paint is that our Client is being financed by Abdullah Umar allegedly involved in terrorists financing. Who is now financing who?

“Again, Chief Adeyemo is a car dealer trading in the name of Adesun International Concept Ltd. Does it mean that anybody buying car from him or selling car to him is a terrorist?

“Chief Sunday Adeyemo a.k.a Igboho Oosa was not into Oodua Nation until last year. So finding over #273m turnover between October 2013 and September 2020 shows that he was not a poor man. His house invaded by DSS on 1st July 2020 is worth over #2billion!

“I challenge the Hon AGF to mention the lawmaker that sent money to Chief Sunday Adeyemo for terrorist act whether he would not be damnified in exemplary damages for defamation.

“Up till date our client has not been prosecuted or found liable for any criminal act or terrorism. There is also a VALID AND SUBSISTING court judgement that agitation for self determination is not an act of terrorism but fundamental human right of any citizen.

The minister also said that the Federal Government had received the report on financiers of Sunday Adeyemo (a.k.a Sunday Igboho).

Malami had said, “The report revealed that Igboho is a director and signatory to Adesun International Concept Limited registered on April 23, 2010.

”Igboho is linked to 43 bank accounts in 9 banks.

“A total sum of N127 million was received by Igboho from his financiers between Oct. 23, 2013 and Sept. 28, 2020 through Adesun International Concept Ltd accounts.

“It might be recalled that Abbal Bako & Sons and its promoter Abdullahi Umar Usman are suspects in the on-going Joint Terrorist Financing Investigation.

“Abdullahi Umar Usman is by way of financial transaction connected to Surajo Muhammad (who was sentenced to life imprisonment in UAE on charges of financing terrorism (Boko Haram),” Malami said.

The minister explained that the report showed the nexus between separatists’ agitation, terrorism financing and disruptions of peace in the country.

“The report found connections of financial transaction between Adesun International Concept Ltd (belonging to Igboho) and some construction companies and businesses among others”.