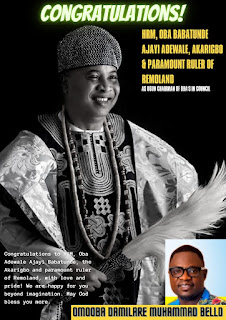 The Sagamu just concluded 2021 Peoples Democratic Party Chairmanship Candidate, Prince Damilare Muhammed Bello have congratulates His Royal Majesty, the Akarigbo and paramount ruler of Remoland, Oba Ajayi Babatunde Adewale on his inauguration as the chairman of Ogun Obas in council.

In a statement signed, observed and received from his media personnel, Awobajo Adesegun by Eaglesforesight, on monday 25th of october, 2021, Omooba Damilare said that he is always proud to associates with Oba Babatunde Ajayi and support his vision. He said; there is no gainsaying the fact that this rotational appointment of Akarigbo as the head of the council will bring forth development to the state as the Monarch is a well connected and progressive King whose his influence will attracts many subjects into Ogun State.

The sounds of joy by the crowds and presence of well meaning to well wishers who thronged into the venue today, indicated that Akarigbo is a world class monarch, and that is enough testimony, to not doubting the fact that His Royal Majesty vision on a better society for the state and humanity as a whole can never be underestimated.

Omooba Damilare prays to God, to grant Kabiesi Akarigbo more solomonic wisdom, knowledge and sound health of mind throughout his tenure as the chairman of Ogun Obas in council