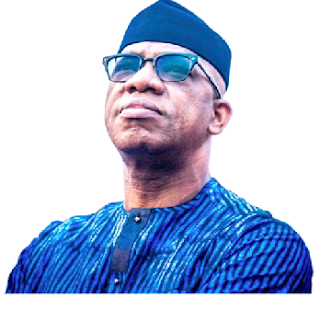 Some aggrieved residents of Ogun State have called out Governor Dapo Abiodun over the palliative works he claimed to be doing on the collapsed Sango-Ota road, saying he did not deserve a second term as governor.

Barely three days to a mass protest planned by the Nigeria Labour Congress (NLC) over the poor state of Sango-Ota road, Gov Abiodun, on Sunday, announced that the “palliative roadworks on Sango Ota-Joju-Abeokuta Road will bring relief to multiple road users daily transversing this route.”

He said “The Ogun State Government understands that the present condition of the road is inconducive to use, which is why I have directed that even though it is a Federal Government-owned road, measures be immediately put in place so that it can bring succour to residents and other users.”

On Monday evening, the governor shared photos of the work being done on the road, saying: “Following my directive to immediately effect palliative measures to make the deplorable Sango Ota-Joju Road usable pending full reconstruction by the Federal Government, the contractor in charge has today, Monday moved to site and done significant work.

“In addition to the ongoing Sango Ota-Idiroko Road repairs, this step should, in the interim, bring comfort to the good people of Ogun State who remain the priority of this State Government under our Administration.”

However, it appears Ogun residents were not satisfied with the measures put in place by the State Government to mitigate their sufferings on the road.

Taking to the social media to express their grievances, many lambasted the governor, regretting their decision to vote for him in 2019.

While telling him not to expect a second term, the residents said they were baffled that Abiodun was expecting applause for laying granites on a collapsed road.

However, there are some who lauded Abiodun for the palliative works, charging him to do more in other places across the State.

Here are some comments:

Tijani Abiodun Taoheed: “Your Excellency, you don’t deserve a second time. Almost all Ogun State roads are not in good condition. Ogijo area under Sagamu Local Government has no good road, no light. Please sir, do something, we voted you to power.”

Oladipupo Titilayo: Even the ones that are not federal roads, what are you doing about it? Yeye palliative. U don’t want NLC to expose your bad government. My advice to APC is not to give you ticket for another term, if not, they will lose.”

Noel Oluwadami: Mr Governor, I have seen governors in Ogun State, but this your own, despite being a member of our party, is highly condemnable. Infact, I am shocked, but why should I be when you are also another politician that cares less about the masses? Well-done on this post that you expect us to applaud.”

Prince Adetunji Lukmon: “I dont know what you are in office to do if not for the interest of the citizen who voted you in. You are joyous to announce a palliative work on a road and area where the state generates the largest IGR monthly. You forgot you are spending the states money, not yours. Sir, you should be ashamed of this post Mr governor. Don’t worry, 2023 will soon be here.”

Tunji Adewoye: “It’s glaring that there is a total disconnect between the government and the governed. No excuse is logical over the complete collapse of this inter state roads – navigating through the industrial nerve centre of Ogun state. What a shame!”

Abosede Durowoju: “But why waiting till now before palliative measure is done? Lanfenwa/Itele is under state and as such something reasonable should be done there. Let corporate organizations take some responsibility; but no. Major roads in Ado-Odo/Ota is worse, unpassable, many abandoned roads and bridges litter around. Inflation rate, bad roads etc. Hope abandoned roads will be done before 2023.”

Sowunmi Kazeem: “Who is fooling who? Mr Governor, I am highly disappointed in you. We have lost trust in your government. When you where coming, you promised heaven and earth.”

Tajudeen Arepo: “A government that is wisdom driven would use Ado-Odo/Ota to showcase her richness using the industrial wealth therein. Unfortunately, the actions of successive administration points to a single thing: ‘keep Ota down’. You can’t keep a man down without staying down with him. I find it difficult to understand the rationale for this continuous neglect of the economic lifewire of the state. It’s a shame.

Lateef Erinfolami: “The whole road in Ogun State commercial heartland of Ifo and Otta Ado-Odo/Ota local govt. are totally in deplorable state. Sango-Ijoko-Agbado Road is completely not motorable. This should be a formost on the State government agenda on Road construction. Businesses are dying and the health of the community is getting worse. Focusing on this road will bring great benefit to the State government. Please act now before the next rain.”

Olanbiwonninu Ojikutu: “You are one of the regrets in Ogun State. What you wrote up there is gibberish, arrant nonsense. Despite the proximity of the state to Lagos, you ain’t developing. Always waiting for the Federal Government to fix the road for you.”

Emmanuel Adegoke: “Mr Governor, if it hadn’t been NLC ultimatum, you would have left us suffering on daily basis? I regret voting for you sir.”

Adebanjo Damilare: “Your Excellency sir, you need to sit up to your duties and justify the mandate given to you by the good people of our Ogun state. There are lots to be done on road infrastructure, but they remain undone. Why not emulate your brother Governor in Lagos who completed Ambode’s uncompleted project (specifically Agege Pen Cinema road reconstruction/overhead bridge) project within a year in office. In your case, it is otherwise. You politicise everything at the detriment of the citizens. Abandoned/uncompleted projects here and there across the state with no attention under your watch. You have been energizing your predecessor and rival (Amosun) to become more recalcitrant to your administration and gain the love of the citizens over you as the Governor by your lackadaisical attitude to your duties as governor of the state. One BAD term DOESN’T deserve another. Enough of social media road construction. Ogun state should not continue like this.”

Tunde Dawood-Akerele: “What a delayed action therefore, it isn’t well appreciated. After many vehicles had been damaged, products and materials had been wantonly destroyed. Oh I trust Sanwo-Olu.”

Oyaleke Gbenga: Thank you Your Excellency. This shows that you are a governor with listening ears. God bless you sir. However, help us so that they can fill the stones up with sand and let roller press it down. The stones are very sharp and could even damage the vehicles you’re doing the palliatives for. Kindly help us so we can derive good value for the efforts. Once again, God bless you sir.”

Akinola M. Olatunde: “All of you praising him, may your lives be smooth as Ogun state roads.”

Dml Yusuf: “Why can’t the roads be maintained before they got worse to this level? You’ve all conditioned Nigerians brain to think you’re doing the very best with these sub-standard roads. Do you want to tell us FG is not aware of this quasi-infrastructure you are trying to deceive us with? All of you should stop fooling us.”

Ezekiel Abiodun: “Even though Nigerians forget easily, but some of us don’t easily forget the past. I said it many times that your style of administration is not different from that of the former governor of ogun state, in person of Otunba Gbenga Daniel. Nigerians are wiser, how long will you continue to wait for federal government to fix road that is causing untold hardship on the people you said you are governing. Does the President know what is happening in your state? Please, borrow idea from Lagos State Government on how they are fixing federal roads without waiting for federal government to come and fix it for them.”

Aboluwarin Oluwasola: “Olodo governor, I’m not buying into the palliative you’re giving the roads, because it’s a step to avert sheer disgrace as plans are already concluded to close down the axis on Thursday as a result of the impending serious protest from all concerned quarters. His move, though late, was to save his sorry ass the awaiting embarrassment on Thursday. You’re a disgrace as a governor.”

Ibrahim Adesola: “How I wish Ado Odo/Ota local Government belongs to Lagos State. May God save the soul of Ado Odo/Ota from the hopeless situation we found ourselves.”

One Month After His Promise, Sunny Ade Yet to Meet ‘Forgotten Daughter’