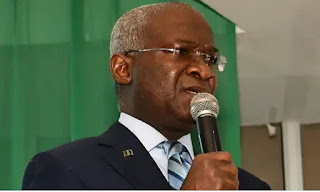 The Ogun State chapter of the Nigeria Labour Congress (NLC) has described the Minister of Works and Housing, Babatunde Fashola, as a liar and an enemy of the state, warning him not to visit the state.

The NLC said Fashola had visited Ogun some months ago, promising to commence reconstruction works on the collapsed portions of the Sango road.

However, the workers, during another protest on Wednesday, expressed disappointment that “Fashola failed to fulfill his promise” months after.

Eaglesforesight recalls that the NLC had on October 6 stormed the Sango portion of the Lagos-Abeokuta highway with a threat to shut down the state if nothing was done within 21 days.

As the 21 days ultimatum elapsed, Ogun workers and residents gathered at Sango again for a protest, carrying placards with various inscriptions like, “Enough of bad governance”, “Dapo Abiodun, let us enjoy the dividends of democracy in Ogun”, “Dapo, this suffering is too much”, “Hear our cries, Ogun people are suffering”, “Dapo repair our roads, it is our right,” and others.

Speaking, the NLC Chairman in Ogun, Emmanuel Bankole, said Ogun workers had declared Fashola a “persona non grata”, saying, “we don’t want to see him, he lied to us, he fooled us.”

Bankole said: “21 days ago, we were here. We gave an ultimatum to the government that we are not pleased with the state of the roads; particularly the Minister of Works coming here to promise that palliative works will commence immediately and several weeks after nothing was done. That was why the 21 days ultimatum was given.

“Interestingly, a few days ago, they started some works. We can see some loads of granites by the state government. But this is not yet what we asked for. The Minister was here and he promised to commence immediate palliative, which is yet to happen.

“We saw what is in ground which is the effort of the state government. The Federal Government cannot be collecting all the money and be inflicting pain on us. That’s why we are here to make the statement loud and clear that Babatunde Raji Fashola, the Ministry of Works and also the FERMA in Ogun State are being declared persona non grata.

“When we leave this place, we are going to the FERMA’s office in Abeokuta and also Ministry of Works to send message to their headquarter in Abuja that we are not pleased with what they are doing.”

Bankole explained further that the initial plan was to shut down the entire state, but for the efforts of the Governor Dapo Abiodun government.

“Ordinarily, the decision was to shut down this place entirely, but the efforts that we have seen by the State Government, the place will not be shut down. We are sensitive, we are not here to inflict pain on the citizens of the State. The citizens are already in pain. We are not here to add to it but to make a statement loud and clear that we won’t allow them to make a mess of us, just like Raji Fashola coming here to tell us that work would start immediately and nothing was done for more than two months. This is unacceptable to us and we are ready to take action.

“Our people are on ground here to monitor the state of progress. We have our networks all over the state. We would not allow them to come and do window-dressing and leave this place. We want to be monitoring day-to-day progress on the road, I can assure our people about that,” he submitted.

Why Naira Redesign May Be Nullified In Court – Falana Stated Reasons

2023: I Was Born In 1952 – Tinubu Finally Opens Up On Age, Chicago University Certificate, Work Histor

2023: I have never lost any election – Tinubu fires back at Babachir Lawal