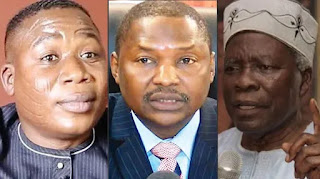 Says “Malami’s Accusations Against Igboho Watery, Empty, an embarrassment to his Brand, Status”

The Group, led by a renowned Historian, Professor Banji Akintoye, opined that the statement linking Igboho with an indicted Sponsor of Terrorism is empty, watery, cruel and irresponsible, stating that “the Nigerian Government is just chasing shadows and attempting to bully the struggle for Self-Determination of the Yoruba people out of relevance”.

In a statement late friday evening, the Communications Secretary of IOO, Mr. Maxwell Adeleye, said there was no where in the report read by the Minister of Justice and Antoney General of the Federation, Abubakar Malami, SAN, where Ighoho was found Sponsoring Terrorism, saying “linking an Ighoho to Terrorism because he transferred #12.7m to a friend of someone who is an indicted promoter of terrorism is an embarrassment to his (Igboho) status and brand.

“We have read the statement credited to Mr. Abubakar Malami, SAN on behalf of the Nigerian Government. Our preliminary position is that having been defeated legally and morally, the Fulani-Controlled Government of Nigeria is now chasing shadows, bullying the truth, and making an inconsistent attempt to tarnish a noble struggle of the Yoruba people.

“There was no where in the statement where Igboho was directly or indirectly linked to Terrorism. We only read that Igboho transfered the sum of twelve million, seven hundred and fifty thousand Naira only to one Abdullahi Usman who is a friend of someone who is now an Indicted promoter of Terrorism.

“We are surprised how that has now become a crime?. Was there any linkage between Igboho and the original indicted promoter of Terrorism? What was the money Igboho paid into Abdullahi Usman meant for? Is Igboho now the one funding Terrorism in the North? Even if there was an association between the real indicted promoter of Terrorism and Igboho which the Malami statement did not say, was it legitimate or was it on Terrorism?

“For instance, we started the struggle for Self-Determination in 2019, but the Nigerian Government is labelling the transactions between Igboho, a Political Figure and Freedom Fighter and an unknown Political Figure dated back to 2013 as funds for promotion of Yoruba Nation Struggle for Self-Determination. Igboho is a renowned Automobile Dealer. So, anyone could buy Cars from him.

“We are, however, glad that the Nigerian Government is now displaying heavy shallowness and emptiness before the world while attempting to bully and tarnish a just and constitutional agenda that has been declared noble and legal by a Court of Competent Jurisdiction which the Government has not appealed against.

“The most outrageous part of the accusations against Igboho was stating that Igboho is sponsoring Terrorism because he transferred the sum of 12million Naira to a friend of an indicted promoter of terrorism.

“To us in IOO, the accusations against Igboho are ridiculous, cruel, petty, irresponsible and childish. The Nigerian Government is now frustrated having lost the battle against the agitations for Self-Determination, both in the courts of law and public opinion, hence, resorted to blackmail and media bully.

“Just today, the remaining two arrested Aides of Igboho in detention since July were released by the DSS on Court Order.

“Therefore, the Yoruba people are anxiously waiting to know the invincible Federal Lawmaker accused by the Fulani-controlled Nigerian Government of supporting Ighoho so that we can celebrate him or her as a true son or daughter of the soil for associating with a just and noble cause.

“Our advice to Malami is to use his energy towards ensuring that the current 1999 Constitution of Nigeria is abolished and a referendum is conducted  so that the indigenous people of the South and Middle-Belt can decide on their nationhood and sovereignty rather than working against posterity and propelling a bad history for himself”, IOO said.

Pictorial: What Soyinka Says When He Met Igboho, Akintoye In Benin Republic.

Nigerian lady who admitted to sleeping with a dog for N1.7m landed in serious trouble, clarifies on motive