The Agitations For Self Determination Is Legal, Has Been Declared By The Federal High Court 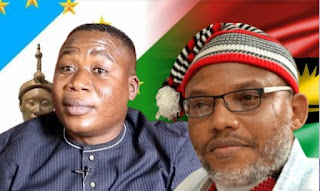 The Agitations For Self Determination Is Legal, Has Been Declared By The Federal High Court

Justice Ladiran Akintola of Oyo State High Court on Friday made a declaration that campaigns for self-determination by people in Nigeria is legal and a fundamental human right.

Delivering judgement in a suit filed against the Federal Government by Chief Sunday Adeyemo, popularly called Sunday Igboho, Justice Akintola said with the combined provisions of international and domestic laws, Nigerians, including Igboho, had the unquestionable and inalienable fundamental right to campaign and agitate for self-determination.

The judge also awarded N20 billion to Igboho against the Federal Government as aggravated damages over the invasion and destruction of his home by operatives of the State Security Service (SSS) on July 1, 2021.

Justice Akintola granted all the 16 reliefs sought by Igboho in the suit filed on his behalf by his lawyer, Chief Yomi Aliyu, SAN.

The reliefs include: “A declaration that the Federal Government’s resolve to prevent him from propagating his belief in ‘Yoruba Nation’ in association with others was against his fundamental rights to freedom of thought, conscience and association.”

Specifically, Igboho asked the court to declare that he and his Yoruba indigenous people had unquestionable and/or inalienable fundamental right to peacefully campaign and seek self-determination of Yoruba tribe in Nigeria and lobby the legislature to amend the CFRN, 1999 as guaranteed by Article 20 of African Charter on Human and Peoples Right (Ratification and Enforcement) Act, Laws of the Federation, 2010, and Articles 3, 4, 7, & 18 of the United Nations Declaration on the Rights of the Indigenous People made at its 107th Plenary Meeting of Thursday 13th September, 2007, thereby insulating campaign for self-determination from criminal culpability.

Other reliefs sought by Igboho are: “A declaration that the respondents resolve in preventing the applicant from propagating his belief in association with other like-minds in creating a Yoruba Nation and/or Oduduwa Republic for his Indigenous Yoruba People and hunting him with gun with a view to arresting him dead or alive when he had not called for war in achieving same was against his fundamental rights to freedom of thought, conscience and association since campaign for self-determination is recognised by Nigerian law and international treaties of organizations to which Nigeria belongs.

“A declaration that apart from violating the fundamental right of the applicant to fair hearing, it is unequitable and unfair for the 2nd & 3rd respondents to exhibit guns, ammunition and other dangerous weapons and incriminating documents in public and claim that same belong to the applicant when their officers in actual fact shot their way into the house of the applicant situate, lying and being at Igboho Villa, 1, Dalag Street, Off Soka Bus Stop, Soka Area, off Lagos-Ibadan Expressway, Ibadan, without subjecting themselves and their convoy of vehicles to prior search by the applicant who neither signed any inventory nor search warrant containing inventory to that effect. “A declaration that the media trial of the applicant by the 2nd & 3rd Respondents in exhibiting prohibited and/ or illegal items as Applicant’s before the press and live television is usurpation of judicial power reserved by CFRN, 1999, for courts and violently violates the fundamental right of the applicant to be presumed innocent until proven guilty by a court of law recognised y the said constitution and properly constituted for that purpose.

“A declaration that invading and or blocking the assets of the applicant and putting no debit order on his bank accounts is a violation of his fundamental right to own property and wealth guaranteed by CFRN, 1999, and Article 21 of African Charter on Human and Peoples Rights (Ratification and Enforcement) Act, Laws of Federation, 2010.

“An order of injunction restraining the respondents, their agents, privies and associates in other security forces and or anybody acting on their behalf and or instructions from arresting, detaining, molesting, harassing and/or in any way interfering with his right to personal liberty, freedom of movement and peaceful enjoyment of his property without fear of the invasion of his home by the respondents.”

Igboho also demanded that the court should compel the respondents jointly and severally to pay him N500.5 billion made up of the sum of N500 million as special damages for the damage done to his car and residence at Soka, Ibadan and the sum of N500 billion being exemplary and/ or aggravated damages for malicious invasion of his Soka residence.

“Suspicion cannot take the place of law, no matter how strong it is. The ugly show of crude fire power by the respondents or their agents, leaving death carnage and destruction behind should be condemned.”

The court further held that the invasion of Igboho’s residence in the middle of the night without a warrant violated his fundamental human rights to property, life and family under section 35 (i) (a-c) of the 1999 constitution.

Justice Akintola added that the judgement would serve as a lesson to government agencies who are fond of infringing on the fundamental human rights of citizens and further awarded N2 million as cost to Igboho. In his reaction after the judgment, Igboho’s counsel, Alliu, SAN, said the judgement was a victory for democracy and the rule of law, adding that it had further proved that the court is the last hope of the common man.

“We now see that we have to go back to the motto of the NBA, and that is exactly what happened today, which means, where there is a damage, there is a remedy. We can see the language used by my learned lord, Justice Ladiran Akintola, and you heard what I said in court that today’s case is history and lawyers yet unborn will refer to it as you are referring to previous cases,” Aliyu said.

The Attorney General of the Federation (AGF), Mr Abubakar Malami (SAN), on Friday, announced the decision of the Federal Government to appeal the judgment. While speaking on the development in an interview with the News Agency of Nigeria (NAN) in Abuja. Malami said that efforts were already being made to commence the process of appealing the judgment.