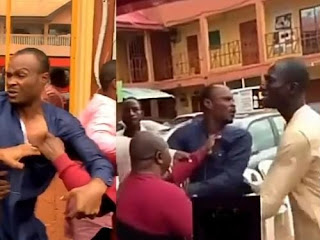 The Speaker of the Plateau State House of Assembly, Rt. Hon. Abok Ayuba was on Thursday impeached by 8 out of the 24 members of the House. This occurred at an unusual sitting presided over by the Deputy Speaker of the House, Hon. Saleh Yipmong. Hon. Yakubu Sanda representing Pengana Constituency is now the new Speaker.

Eaglesforesight source confirms that the Speaker has been under fire since the unrest that bedeviled some communities in Jos North and Bassa LGA, where several people were killed, many injured and others displaced from their ancestral homes.

The House of Assembly had given the Governor of the State a two-week ultimatum to take action on the resolutions forwarded to him on “security matters and how to restore peace in the State.” The House also called on the Governor to come up with a statement defending the citizenry in the wake of the myriad of security challenges bedeviling the State.

Eaglesforesight source gathered that the eight members gained access to the House as early as 6am to carry out the act. They operated under the heavy presence of armed security personnel. The lawmakers attempted to impeach the Speaker on Wednesday night but could not succeed.

Hon. Nanbol Daniel, (PDP, Langtang North Central) said that the impeachment would not hold because it did not follow the House rules on impeachment of speaker and deputy speaker. The embattled Speaker is yet to respond to the development.

“We Know Where They Are, We Know Their Camps, Phone Numbers ” – El Rufai Reveals Plan To Tackles Bandits

We have enough new notes for banks, says CBN